This update is perhaps long overdue, but I purchased the Olympus E-PL5 in March about a month after writing the post found below and I must say I have been very happy with it. So much so that I went on to purchase a sweet retro case from Kaza, and 2 lenses. The Panasonic Leica 14mm and an Olympus Zuiko 40-150mm zoom both purchased for a steal second hand at Southeastern Camera in Carrboro, NC.

To say I am happy with the decision would be an understatement. So much so I am now eyeing a Olympus vf4 EVF as an early Christmas gift. Even with purchasing that I would have body, flash, 3 lenses, case and EVF for less than I would have paid for many cameras w/o a kit.

Since then I have had a great time snapping pics every day as well as on a DC field trip, a family trip to NYC and upstate NY, local museums and more.

Olympus is still at it and has released or announced some great cameras since, like the OM-D E-M1 and EP-5, but I am still quite happy with the little E-PL5. And the great part is that if I do ever decide to upgrade one day I can still use all of my accessories. Here are my original ramblings from February below:

For quite some time I have been looking for a camera that married the best of my father’s old school Pentax ME Super film camera (interchangeable lens selection/manual control/long range image quality) w/ the best of my smartphone, most recently Galaxy Nexus, iPhone 5 and now  Lumia 920, (quick frame rates/portable/filters on device/great low light performance) in a reasonably sized package for a reasonable price.

I have good friends at work who are advanced, quite excellent photographers (Judy Kea and Anthony Smith), and they operate and speak on all things camera on a level well beyond my opportunistic hobbyist “hey look at that, snap” skill level. They operate in the DSLR realm which is fantastic, but beyond my … *ahem* frugal budgetary aspirations when looking at the latest and greatest presently. Not only is the price of admission steep, but the accessory prices are mind numbing to me. The in depth technical jargon causes me to glaze over as well, I must admit. I am not saying DSLRs are not worth the price, just that I am not willing to pay the price of admission. Also these things are huge which means that it would forever be left in a camera bag at home. I have been watching the mirrorless trend with interest because it seemed likely to be the technological/ease of use/compact size/price bridge I have been looking for, but none seemed to nail it just yet. Then enter the latest micro 4/3 sensor system cameras from Olympus.

Enter the OM-D (hm… Had a brief  WuTang flashback for a moment there.):

The reasonable size part was addressed by the Olympus OM-D that has received stellar reviews all around. Considering what you get (image quality, portability, an interchangeable lens ecosystem with many great options from Olympus, Panasonic, and 3rd party companies) it was amazing at the $1,299 price point. Especially considering that the price included a stellar motorized lens and flash bundled with it. Plus look at the thing. It is retro-gorgeous, looking like a miniaturized Olympus OM-1 film camera from back in the day.

Ok, I do not really blame Anthony since I was a willing participant. I first learned of the OM-D when tagging along with Anthony on a trip to Southeastern Camera. He was looking to purchase an old school film SLR and some B&W film (first sample shot of yours truly). Anthony found a sweet old school camera and during the instructional walk through by Chris I had flashbacks to my father teaching me to use his camera when I was a kid. After being hit by the ‘me too’ bug I called my father, confirmed that he still had his trusty old Pentax ME Super and purchased some B&W film of my own (leading to this album). The time to upgrade from my smartphone and string of Panasonic Leica point and shoots had arrived evidently  At the shop Anthony asked Chris if there was a modern camera he would recommend and he brought out the Olympus OM-D. I was hooked immediately, but I love  a good deal. Again, $1,299 was a great price for such a great camera and much closer to my price point (and physical size) than a DSLR, but it was still about twice what I wanted to pay for a hobby. On a return trip to get the aforementioned B&W film developed I asked Chris if there was a… *ahem* more affordable option to the OM-D that kept the best the OM-D had to offer, more specifically the same 4/3 sensor and flip screen. Enter the E-PL5:

Huzzah! In all fairness I must mention a couple of cons as compared to the OM-D:

After an obsessive round of internet research I am sold. In addition to the review and sample photos mentioned above I found many links helpful in making my decision with my favorites below:

My accountant/reality checker (aka my wife) has given her whole hearted clearance (love that woman) to purchase this bad boy. Here is a gallery of samples images.

First kit test roll done and developed. Scanning next.
Night light.
May have cackled a bit. This was inevitable for an oddball film camera nut like myself. A modern Art lens on a dirt cheap competent camera? Yes please. Right up my alley. Running through my first roll. 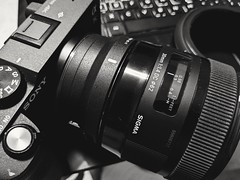 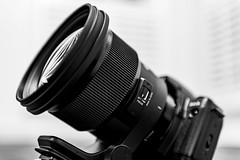 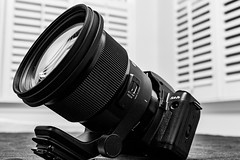 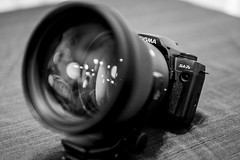